We try before you buy.

Here at Freedom, we take that philosophy very, very seriously. So when the Boss asked, “Who’d like to go ‘f’ fast, in a speedboat, up the Thames?” A dozen hands shot up, me please.

Billed as the fastest way to see the Thames, we can confirm this is totally true.

The Freedom Team made their way down to the Southbank and were met by an enthusiastic staff member, who told us his name was ‘Little Mike’. Mike took us through all the Thames Rocket safety procedures, you know the important stuff like get your life jacket on. We did as we were told.

Once boarded Mike introduced us to our skipper Chris and explained that as much as Chris wanted to take off at rocket speed, he’d be done for speeding by the Thames Police. Oh, well we wouldn’t want him getting a fine and needing to attend a speed awareness course, so we took in the sights until well passed the Police restriction areas. 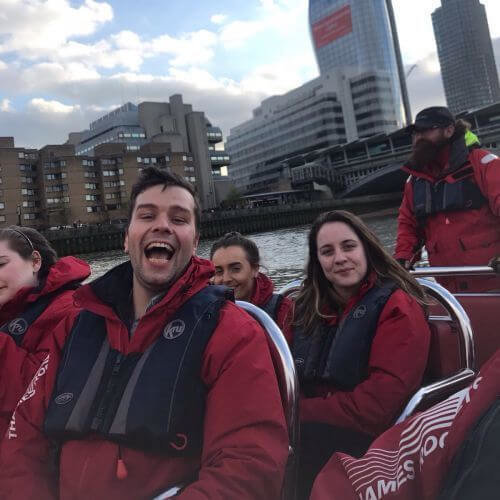 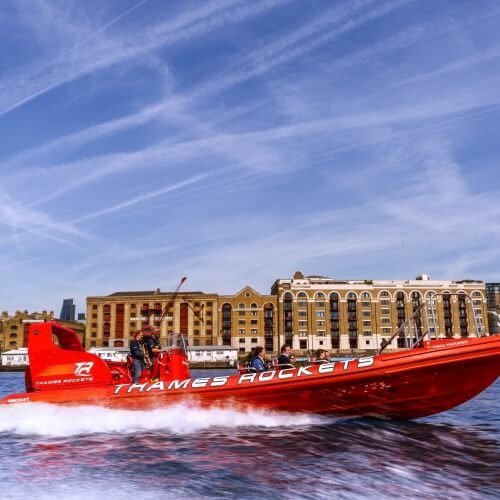 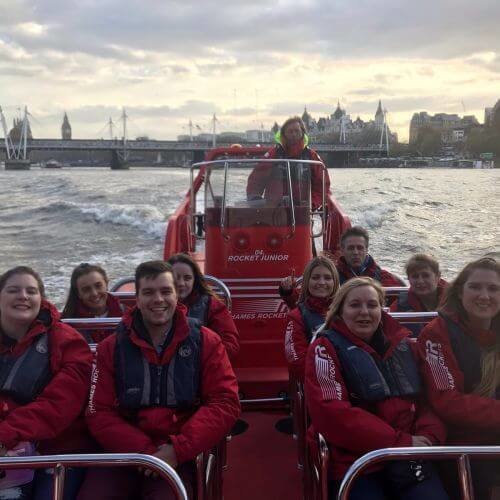 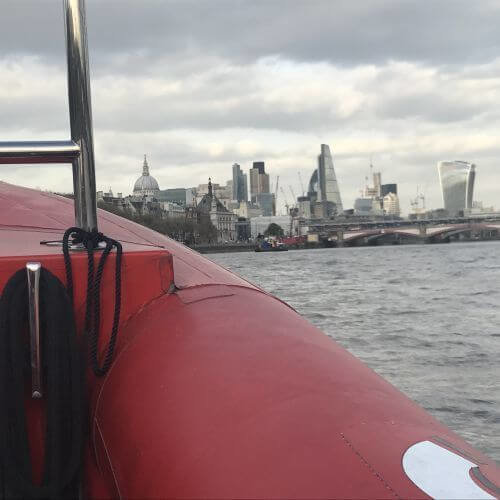 Chris then let rip and showed us exactly how the boat earned its place amongst the Thames Rocket fleet.

We whooped, we screamed and yes some of us did grip on for dear life.

All those fantastic adjectives like exhilarating, adrenaline pumping, awesome… were all applicable.

Mike maintained a running commentary of the sights as we passed, he had amusing anecdotes, fact and fiction and made a point of directing our attention to left and right. He really knew his stuff, delivery was spot on and was fascinating to listen to.

As a party activity this one is a win/win/win… exciting/entertaining/educational.

The Freedom Team say Yes to the Thames Rocket.

Kevin - Freedom General Manager - "Having booked many groups on the boat in the past it was great to finally get out and experience it first-hand. The Team were top notch, they really knew their stuff and it was an awesome - arguably best - way to see London!"

Average 4.85 out of 5 Stars From 1579 Reviews
Freedom Ltd Stag Weekend in London
I found the ladies at Freedom very helpful throughout the entire process. It's not easy organising events like these, as the invited participants usually change things very late on! However, none of this bothered Freedom & they obliged without any complaints! The weekend went very well & according to plan, which was much appreciated. Moreover, Zack had a great time - which is what it's all about! So did the rest of us! Would gladly recommend Freedom to others - they are a pleasure to work with!

Freedom Ltd Stag Weekend in Cardiff
Was an absolute beaut of a night. The bar crawl the escape room. Everything was awesome. The stag was very please to. Will defo recommend to friends or family. Thanks again

Freedom Ltd Birthday Weekend in London
Had a fabulous weekend booked Bollywood dancing in London for a birthday party. Was easy to book and the company made it totally stress free and simple. would definitely use again. Would thoroughly recommend. Thanks for everything !

Freedom Ltd Party Weekend in Birmingham
We had a great night out organised by Freedom Ltd. The staff were so helpful, its good to be able to talk to a human being if you have a question. Highly recommended

Freedom Ltd Party Weekend in Leeds
Booked a cocktail making event with Freedom for our company Christmas party and it was great. The table we had with all prepared with our cocktail making tools and we were taught how to make 3. It was very fun and the team were very accommodating to our needs. Thank you very much Freedom!

Freedom Ltd Hen Weekend in Liverpool
We had a fantastic time at our Mersey Games activity last Saturday. Definitely would recommend it and booking it all through Freedom was hassle free.

Freedom Ltd Party Weekend in Berlin
It was my turn, the pressure was on. The boys said so. Lets go they said !!. The internet is a brilliant place but not if you havent a clue about what to do or where to go. And then it jumped off the pages and out at me. FREEDOM. the name said it all. Could it be ? I gave it a try. I was not disappointed. It was like a friend had listened to my thoughts and started laying out my weekend. Nothing was trouble. When Charlee, Lucy and Angela picked up my call or responded to my emails, I was reassured. The admin was made easy and the communication simple. Happy Days. So off we went to Berlin...and that was the start of the story. Rest assured we had a brilliant time. Freedom a call away if we fell off agenda. We did the tour, we drank the drinks, danced on the tables and woke up with that where am I feeling. What goes on tour... you know. !! Thanks Freedom. Five stars.

Freedom Ltd Hen Weekend in Newcastle
Organised my sisters hen party entertainment through Freedom. The team are all super helpful with updating numbers, answering queries and sending the information out promptly. The dance divas class in Newcastle the lady was amazing, so patient and her choreography was suitable for all types of dancers! The Adonis show was also fabulous! Thank you all x highly recommend